Target Language: Can you speak English/Chinese/French? etc. + motivation!
Target Grade: All ages
This song is in the Teacher's Set
And in the new curriculum

"Can you speak English?" and "Can you speak (your native language e.g. Spanish, Korean etc.)?" is one of the most useful phrases for any language learner.

Here we combine it with "Yes, I can!" to get kids confident in speaking English and realise that even if they've only done a little bit of Genki English they can actually speak some English!

The first few times through the teacher asks the questions. The kids all answer "Yes, yes I can" for the chorus, and they answer honestly for the verse questions. (Usually I just let them say "no" instead of having to say the full "No, I can't")

Every time you say the chorus line, get the kids to say the answer even louder. The idea is to get them used to saying "Yes, I can" when thinking about speaking English. This is probably the most important lesson, whether it's for languages or even if you decide to become the first African American president!

It's a very quick song to do but really useful and as usual it will stay in your head all day! 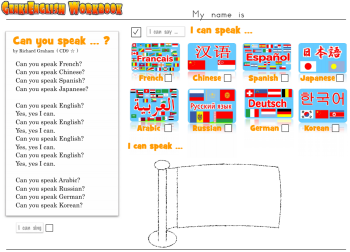 One more time,THANKS for this song!!!

Today I had my last lesson with the 6th graders. After reviewing the conversation patterns I taught (there were only 6 lessons this year) I introduced the Q+A for this song, using some impressive comments and advice for when they go to Junior High.

Then we did the song, without long explanation they pumped up their volume and song from their heart.
And the best acknowledgment I could get was: the homeroom teachers were crying in the end.


I just taught this song today, and was a little nervous about the kids getting all the languages. But lo and behold, I just treated them like any other vocabulary, and within a few games, the kids were all "Do you speak Arabic?" "Do you speak Japanese?". The only thing is they think it's uproariously funny to sing "Yes I can!" at the top of their lungs for all of the languages, but I guess it's okay if they understand that they're making a joke.

Here's a few games I did if anyone needs help for the future:

To start, I had all the big flashcards hung on the board, with the names of the languages written under them. Then we read them all together. Then one student got to read them all one by one. Then I erased the first language, and a second student said all the languages, including the erased one. Then I erased one more, another student said all the languages, etc, until at the end the very brave ones were volunteering to recite them all by memory with no words written on the board.

Then we played 123 Jump. You stick all of the flashcards around the room on different walls with blue tack, and everybody stands up and you check where they are as a group. Then I say "Can you speak German?" and then say "1,2,3 JUMP!" On "jump" all the students jump and point together at the German flash card, wherever it may be. Continue with the rest of the languages, and you can have the kids say the question, too.

Then we played a dice game that they never get sick of and works for reviewing any new vocabulary. You split into 2 teams, and the players take turns coming to the front of the room to roll a die, and then they must say that many sentences (or questions, or just the words, whatever you'd like), and earn that many points for their team. So for example, a player from team 1 comes up, rolls a 3, and says "Can you speak German? Can you speak English? Can you speak French?" earning 3 points for her team. Then somebody from team 2 comes up. I usually play until everyone has had a chance, or two turn in smaller classes.

Lastly, we played Evolution, which I think I got from this site, but I'll paraphrase it in case I didn't. First, you get 4 animals from the class, and write them on the board from simplest to most complex (so maybe dog, horse, elephant, dinosaur). Basically you have the students speak the target conversation (In this case: "Can you speak Chinese?" "No, I can't. Can you speak English?" "Yes, I can."), then they Rock, Paper, Scissors. The winner moves up one evolutionary step (to horse), and the loser moves down one (never past the lowest). They then have to find the same animal to have their next conversation with. When they reach the highest level, they get to play against the teacher, and then either sit down once they've won, or take your place.

Wow. This turned into an epic post. This was a 50-minute class, and after these activities, the kids were pretty solid on remembering which language was which and being able to say them themselves. We also sang the song in there, too. I hope somebody can use this stuff! The games can work pretty well for whatever vocab you're teaching.