Days of the Week

Target Language: Days of the Week
Target Grade: All ages 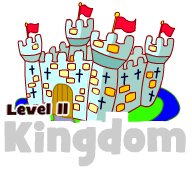 
There are several different versions of this song, depending on how genki your students are!

Here's the "no Saturday" mix where you "forget" to say Saturday- great for younger kids!


Then we have a much funkier version with "When, when?"

Then we have the "What day is it today?" version...


And finally for 6th graders or high school kids, we have the Dance Remix!

This is another topic that doesn't usually interest kids that much so I would keep it for further on in your curriculum, unless if you are forced to teach it earlier!

Having said that, this is Genki English of course, so kids losing interest isn't usually a problem you'll have here! :)

We've chosen special images for each day to make it easy to remember without needing any other vocab:
VIP members can print them out below: 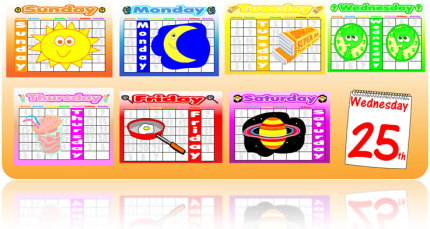 And you can either use these items for gestures or even use sign language.

Plus we have mini cards:

And the dice game (What's this?) 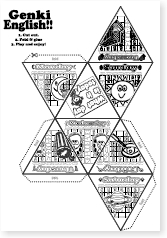 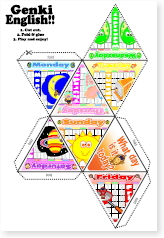 And snakes and ladders (What's this?)

And for testing, the Spaghetti Worksheet ( What's this?)

Or to combine Days of the Week with School Subjects... 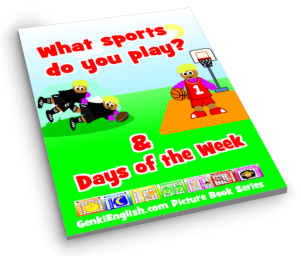 One Card Game
(What's this?)

On vol. 11 I've done several different versions to make it stick in your head all day:

"No Saturday Mix"
Sing the song together but keep "forgetting" to sing "Saturday" The kids "remind" you each time!

"Hmmmm mix"
Like in "Heads & Shoulders" we introduce each day one at a time. This is great for kids who've never heard them before

"What day is it today?"
If you have to teach this phrase, this song makes it easy!

Funky Mix
For older kids! This one also starts with "Monday" if that is the first day of the week where you teach.

Dance Mix
For older students who just need to brainwash themselves into remembering the days of the week for exams. Try it, you'll see what I mean!

1. Write or put up picture cards of two lists of the same vocab on different sides of the board.

2. Leave a marker pen on each side of the board.

3. Divide the students into two teams and have them stand in two lines at the back of the classroom.

4. Have the first student in each line balance an (empty!) plastic cup on their head with their hands behind their back.

5. When you say "go" these students should walk quickly to the whiteboard, say each of the words/sentences in the list.

6. If the cup falls off at any time,the student must stop on the spot,pick up the cup and put it back on his head before continuing - or go back to the beginning!

Teach the days with gestures for each day using the song.

Or if you are in Japan:

Also have a look at the months theme, which is a lot more popular as the kids are always asking about birthdays!

You can also use these Solar System photos to help remember the words. Oh, and as an extra note this is just about the only place where "Twinkle, Twinkle Little Star" can come in useful, because when you look up at the sky and see something bright, if it twinkles, it's a star, if it doesn't, there's a good chance it's a planet!

Some of the files are very big so please be patient. Click on a picture, when the new window pops up be sure to use the Print Box that appears. If you select "print" from the "file menu" on the browser, they'll print out all funny! These pictures are free for anyone to download & are included in the Genki English Picture Card Packs.


FREE: Days of the Week crossword. 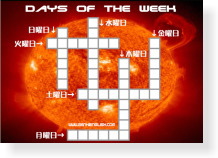 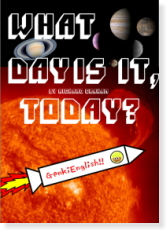 Days of the Week

Or try out these ideas from Atley Jonas...

"Days of the Week" Lesson

Normally, not a very engaging topic but one that is frequently requested by Japanese teachers of English. It can be made very enjoyable and the games are lots of fun! I probably wouldn't try to teach this to younger kids due to its relative complexity, but my grade 4 kids enjoyed the story with the planets and they knew their order in the solar system better than I did! Associating each day's name with the picture of a planet seems to be a really effective mnemonic.

First, I have the Japanese teacher write the kanji ( Japanese character ) for each day of the week across the top of the blackboard. Then, I have the kids tell me what each kanji actually means (in Japanese & in English), eg. ka-yobi = fire day, sui-yobi = water day, kin-yobi = gold day, etc. I call up students and have them sketch a quick picture underneath each kanji.

I then go on to explain that in English, we have a similar system, except that we use the names of planets. I point out that Sunday and Monday have the same meaning in English as they do in Japanese.

Next, I show them a flashcard for Tuesday. I explain that in English, planets are named for Roman and Greek gods. In languages like French and Spanish, they still use the names of the Roman gods. But since it was Germanic people who helped create the English language, they used a mix of their own gods and the old Roman gods.
Tuesday was named for the Norse god Tyr, which they pronounced: Tewe. Hence, Tewe's Day.
Wednesday was name for Odin (Woden), who replaced the god Mercury (Woden's Day).
The god Thor replaced Jupiter (Thor's Day).
The goddess Frigg (or Freida) replaced Venus for Friday,
and Saturday kept the Roman god Saturn.
Finally, Sunday, of course, is named for the sun.

I also explain, that we don't have kanji in English, but we do have traditional symbols for each planet (which I've incorporated into the flashcards to help distinguish between planets like Mars and Venus).

After the kids can identify each day in English with a reasonable level of confidence, I introduce the mini-cards and one of the games below.

The object of the game is to assimilate a collective that consists of an entire "week." This game is functionally similar to "snake tag" or "red rover" you may have played as a kid.

1. Students each get one mini-card for a day of the week (Monday - Sunday).
2. The students "mingle" amongst each other and find a partner.

3. They do janken ( Rock, Paper, Scissors ) . The winner of janken asks the loser a question: "What day is it?"
4. The student answers with the day of the week printed on his card. Eg. "It's Monday."
5. If the day of the week on the that student's card matches the first student's card, he is free to go. If his card is different, he gets "assimilated" and must latch onto the first student (by putting his hand on the students shoulder or hanging onto his shirt).
6. The pair of students now try to assimilate other students into their collective by repeating steps 2 to 5.
7. Each student that becomes part of the collective must have a different mini-card from all other members of the collective he is joining, (eg. two Wednesdays are not allowed). If his card matches any of the other members, he is either free to go, or must rejoin the collective that he got pulled out of.
8. Students in the collective should take turns initiating "janken" with other students.
9. Any student from any collective may initiate janken with any other student, whether he is already part of another collective or not. Ie. you can steal members from other collectives. :-) No "tag-backs" though.
10. The first collective to gather 7 members, each with a different "day of the week" mini-card wins the round/game.

The object of this game is to collect all seven "day of the week" mini-cards to assemble an entire week. It is based on the children's' card game: "war" and the GenkiEnglish Card Game.

1. Each "day of the week" mini-card has a number on it, corresponding to how far the planet is from the sun.

2. Each student receives 3 or 4 mini-cards (preferably all different).

3. When the teacher says "go" students find a partner and "janken" to see who gets to ask the question: "What day is it?"

4. Both students shuffle their stacks face-down. The student who won "janken" asks the question. The second student turns over the top card in his stack answers with the day printed on it, eg. "It's Wednesday."

5. The asking student turns over his own card.

6. The student with the planet that is farthest from the sun (the larger of the two numbers) wins his opponent's card and puts both cards back in his stack.

7. In the case of a tie, either janken to decide the winner, or put the two cards down and repeat steps 3 and 4. The winning student wins all four cards.

8. Several times during the game, (but not too often or it becomes confusing), the teacher should reverse the rule, so that the smaller number (the closest planet to the sun) wins the round. That makes things fair for those students who got "stuck" with low-numbered cards.

9. The winner of the game is not who has the most cards but the student who is first to collect all seven days in a week. So if a student collects three "Friday" cards, they only count as one.

Tip 1: I found that explaining this game to the Japanese Teacher and playing a few sample rounds with him/her prior to the class helps tremendously in conveying the message to the kids and explaining the rules if they can't understand.

Tip 2: It may help the game go smoother if, for the first two rounds or so, you practice the game as a class, with the students playing with their neighbour sitting next to them before you set them loose on anyone.

GenkiEnglish Mushi Battle game (as printed, with mini-cards) using days of the week. The objective being to collect a whole week.