OK, first up is a confession. I don't actually speak Korean yet! I actually wrote this site to help me learn. But what follows is the advice I've used to get fluent in a couple of other languages, including Japanese... 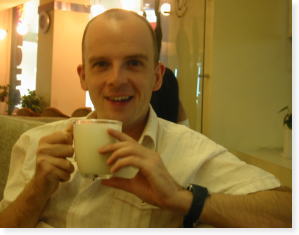 My name's Richard and on this page I'm going to show you some of the hints and tips I've used to learn languages. It takes a while, but nowadays I speak foreign languages everyday, in business and often on TV as well as having articles and columns, in different languages in the press. So if you want to master the Korean language, here is my advice!


1) Try the key expressions on the Korean page

These are some of the basic words and phrases that you will hear over and over. It only takes a few minutes a day and even just a couple of these words will make life a lot easier. It shows people you're willing to learn and with so many people who don't even try, it already gets you big marks in most people's books and they'll bend over backwards to help you improve.

Just like when you learned English as a kid, the key is to learn to hear and speak the words you use most often. You'll be surprised at just how far only a couple of dozen words will get you.

2) Listen to Korean Language CDs everyday on your way to work.

Get as many Korean Language CDs, podcasts etc. as you can and listen to them all the time. "But I'm too busy!" say most people, and I quite sympathise! That's why I'd recommend listening to them on your way to work or school, either in the car or on an mp3 player. Get into the routine and you soon see how much has sunk in.

The trick is to get several different CDs from several different places. That way you get all the basic phrases many times, but presented in a different way. If you're in the car, repeating along is great, but obviously don't do this if you take the subway to work!

There are loads of great resources out there, and one of the good ones is the "Pimsleur" series. They have a "Quick & Simple" starter pack and also a full on "Gold Course". They are well recommended if you want to learn Korean, a couple of years ago I used it to learn everyday Spanish in a month!

3) Learn to read the Korean alphabet

Unlike Japanese or Chinese, the Korean alphabet was designed to be easy to learn. It also looks really good. Once you've mastered a few of the useful words games, try the alphabet. There are only a couple of dozen sounds and it only takes a couple of hours to get started. You'll be amazed at how signposts and advertisements jump out at you once you know the basic symbols.

The major advantage, however, is that you can now read menus. One of the great things about Korea is that you can often simply pop outside and point to the pictures of food on display, but being able to read what they are is much more fun.


( PS. if you like these games, and you teach English, there is a page for English letters as well)


4) Get an Electronic Dictionary

This is what makes all the difference for me. If you live overseas, or in Korean itself, get a talking one with a "memory" function. I've recommended them to loads of friends over the years and they've all said how magical they are. There are specialist Korean only ones, but I actually picked up one that has 9 languages and it has recordings for all of them.

What you do is that every time you hear a word you don't know, you look up it in the dictionary and then put it in the memory. Now when you have 10 minutes spare on the train or whatever, you simply call up the words and test yourself.

The magic is in the power of association. When looking back through the words you instantly recall when you put it in there, "Ah! That's what so-and-so said at the party the other week!" or "Ah, that's from that TV show I saw last week" and all the memories get bound up with the word! Just take it with you EVERYWHERE!

This is another useful trick.

You know in a morning and you wake up, you think to yourself "What time is it? Oh no! Quick, gotta get a shower, then some breakfast, then that meeting at 9 o'clock! Oh no!". Well, do that in Korean! Take a bit of time to figure out the things you want to say, learn them and then use them everyday. The best thing about this idea is that even if you make mistakes no-one will ever hear them! If you find one day that you want to say something and you don't know how to say it in Korean, just look it up. Either use your electronic dictionary or ask a teacher or friend.


6) Put your computer to work!

Despite all the hype, until now all the software I'd ever tried for learning languages turned out to be boring and pretty useless. But the other week I tried the "Rosetta Stone" series and I was well impressed to say the least! It seems that language software has now caught up and become very useful indeed. The best thing is that software gives you targets and structures, which is great for motivation. So if have a computer and some free time, I'd definitely give this my recommendation.

They have a full-on CDROM course and also on-line courses, they are a bit pricey, but they have free trials which are certainly worth looking at. I think I'll be looking at this software for my next language.

This is another great trick that people have been using for ages to practise writing. But as you don't have the time for writing, grab yourself a tape player or audio recorder and speak into it all the things you did today. As with the tip above, if you can't say something, look it up. It's great practise and it's a great source of materials if you have Korean lessons, simply bring a copy along with you and get the teacher to go through it!

8) Keep going, have fun and be Genki!

If you follow the tips on this page, Korean is both easy and fun. It does take a bit of time, but it's certainly achievable. The trick is to set yourself some goals and just stick at it day in, day out, everyday! If you need help with motivation, check out this daily motivation email page - I still get it everyday!

It took me 6 months to be able to hold a basic conversation, a year to teach a NASA science project in Japanese and just over 18 months to talk about politics live on NHK TV! It's all confidence, think you can do it and you can, just keep trying everyday and above all...

Richard Graham is an Education Consultant based in Shikoku Japan. After setting up his own company, www.GenkiEnglish.com his language learning materials have been described by the Japan Times as "...bringing about a grassroots revolution in English-language teaching" and by the Daily Yomiuri as "Taking Primary Schools by Storm". Genki is a Japanese word meaning "full of energy".

Many teachers now use his CDs to teach English in Korea and he manages to pop across to Seoul or Pusan several times a year.

How to speak Korean for free