This site is a collection of fun classroom songs & games to make German lessons exciting, interesting and above all Genki!.

Cool! But what does "Genki" mean?

"Genki" is a really cool Japanese word that means "fun", "lively", "energetic", "full of life". There isn't really a word for it in English, but if you've ever seen these games in action you know what it means!!!

Have I seen this site on TV?

This games on this site are based on those featured on the GenkiEnglish.com website. GenkiEnglish.com is one of the most popular Elementary School teaching sites in Japan with over 5,000 visitors per day and has been featured on TV and in newspapers around the World. "Taking Primary Schools by Storm" was what the Japanese Yomiuri Newspaper said.

The site was also the subject of an NHK TV documentary which was broadcast in countries including India, Singapore, Hong Kong, Thailand, Malaysia, Canada, the UK, the USA and the UAE. and has been featured in many major Japanese TV series, including "Wataru Seken wa oni bakari" and the new Fuji TV Drama with "The Last Samurai" star Koyuki.

Sounds like Genki English is doing pretty well, so why write this Genki German site?

On a recent visit to the UK I saw in the news how teachers are struggling to get elementary school kids interested in languages. I instantly thought that many of the ideas I've been promoting with GenkiEnglish could easily be used to bring lots of genkiness to the German classroom. I studied German at school and it was to be honest really boring, so I figured it'd be cool to let kids know how fun it can be.

So I took some of the best songs & games, changed them around a bit and put them up in this new site for you to use.

Can I use these ideas for teaching any other subjects?

There's also a GenkiMaths.com site, a site for learning Japanese GenkiJapan.net and hopefully in the future there'll be a few more! You can also use the GenkiEnglish.com games for teaching French, Spanish or pretty much any subject if you have the imagination.

What are the "Golden Rules"?

Most of the songs ' games work quite well just as they are, all the preparation and testing has been done for you. There are however a couple of "Golden Rules":

Sometimes kids might get fed up if they lose a game, or other kids might tease the losers. In this case you must teach the kids the golden rule of games, the real meaning of "losing" is that you get another chance to try again!! You never fail until you stop trying!!!!


"Genki is as Genki does"

It's got to be fun! These kids are the MTV, Playstation generation. "Chalk and talk" won't cut it anymore, the subject has to grip them, excite them and enthuse them. A game for a game's sake is no good, but a fun, challenging exciting game with a definite educational aim makes maths as cool as blasting aliens!

So who is this Richard guy then? 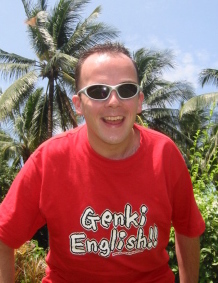 Well, that's me, Richard Graham. If you'd like to know what I'm up to, check out my Daily Diary Weblog!

I've been teaching since the age of 16 and from July 2000 my full time job has been as an Education Consultant. This involves travelling around the World doing teaching training seminars (last year to over 2,000 teachers including speeches for the Japanese and Thai Ministries of Education and giving demonstration classes to 1,000 of kids) writing books, newspaper and magazine articles, developing new CDs, software and videos and working on the websites.  This is a new type of education and I want to make sure people have as many resources as possible to do it right!

Before this I spent 3 years  working as a participant on the Japanese government's JET programme in Tamagawa, Ehime. The main aim of this job was  "Internationalisation", which is where I started teaching  International Understanding in Elementary Schools and Teacher Training.

I have also given prize winning presentations for the British Institute of Physics and the accountancy firm Arthur Andersen.

I'm British and I come from the most happening, kicking part of the British Isles, which is the wonderful county of Yorkshire !! I was also the Ehime Prefecture JET liaison officer to the British Embassy in Tokyo - so please check out the special UkNow Website

I'm 32 and have a First Class Honours Degree in Physics with Electronics and Instrumentation (European), having studied at the University of Leeds (in the UK) and The Universite Joseph Fourier (in Grenoble, France).

Genki English takes up just about all of my time, but when I have been into martial arts, including Aikido, and learned to play the O-Koto. At university I did skiing and Tae Kwon Do. I've also been a regular guest (speaking in Japanese) on NHK's "TereGoji" TV programme!

Please feel free to contact me if you want any more info about the page, or want to drop me a line!

If you like this idea, please tell your friends!